Even though numerous tattoos look great and have some sort of meaningful reason or memory behind them, several are misguided or ill-thought-out mistakes. Thankfully, laser tattoo removal can help anyone remove regrettable words or ugly pieces of art from their body.

But despite the fact that laser removal is the quickest, safest and most efficient way to get rid of a tattoo, several people pursue other methods. Unfortunately, these don’t work as well and can be quite dangerous too, leaving the individual with harmful, sometimes permanent side effects.

In this post we aim to educate you about the dangers of non-laser tattoo removal methods, including invasive and “DIY tattoo removal” methods.

Before the advent of laser removal machines, people went to remarkable lengths to de-ink their skin. One of these extreme techniques was dermabrasion, which some people are still pursuing today in the hope their tattoos will disappear.

Dermabrasion involves scraping away or sanding down the skin using an abrasive device such as a wire brush, diamond wheel, sterilized sandpaper, salt crystals or other mechanical means. The procedure typically requires a local anesthetic due to the high level of pain the patient will undoubtedly suffer.

If the suffering and thought of skin scraping is not enough to put you off, dermabrasion can also cause scarring, discoloration, bleeding, and infection. It can take months to heal properly and might not even have the desired effect.

Expert opinion “Dermabrasion is not the best option for tattoo removal. There are many different lasers used to remove tattoos. Look for a dermatologist who has good before and after photos as well as all the lasers available depending upon the color of the tattoo pigment.”

Salabrasion is quite similar to dermabrasion, but uses water and granular salt in addition to an abrasive device. Rather than sheer brute force, the salty substance is meant to rub and peel away the upper layers of skin.

After vigorously rubbing the region, an antibiotic ointment and sterile gauze dressing is applied and left for a few days before the whole process is repeated again. The salabrasion-affected region of dead skin should start to separate from the healthy skin beneath, pulling the tattoo pigment away at the same time – apparently. 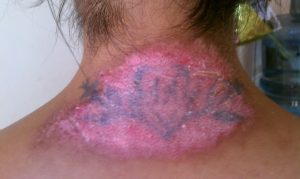 However, just like dermabrasion, this method can be incredibly painful, will leave a visible scar and could result in infection. There is also a good chance that the procedure won’t go deep enough to reach the tattoo ink anyway.

Expert opinion “Salabrasion is not a reliable method for tattoo removal. It also carries a high risk of scarring that cannot be minimized. Spreading of ink within the body causing problems, other than allergy, (if you are allergic to the ink) is purely speculative. There has never been a confirmed report of cancer in relation to tattooing or removal. I would suggest you seek out laser treatment. Phillip Bekhor (MBBS, FACD), Dermatologist at Laser Dermatology, Melbourne.

If you thought dermabrasion and salabrasion were bad, then you might not want to read what surgical excision involves, especially if you’re squeamish. For this procedure, the surgeon removes the tattoo using a scalpel and closes the wound with stitches.

That’s right, surgical excision involves cutting a tattoo out of your skin under local anesthetic. While some will claim this is effective for smaller tattoos and offers improved precision, the cut doesn’t usually go deep enough and may not remove all of the ink or pigment.

On top of that, side effects include skin discoloration, infection and raised or thickened scars, which won’t appear until three to six months after the procedure and may stick around for life.

Expert opinion “Excision will leave permanent scarring and dermabrasion will likely leave scarring as well as loss of pigmentation that may not be reversible. Laser treatment has improved dramatically in the past year and is by far your best option.”

Similar to a salt solution, some people are using acid to get rid of their tattoos, as it causes a reaction and removes the top layer of skin. However, numerous health professionals strongly advise against this method due to the dangerous chemical properties of the acids being used. The most common acid procedures include:

TCA Peel – TCA stands for TriChloroacetic Acid and will burn away outer layers of the skin. The amount of time this chemical peel is left on the skin will determine how many layers are burnt away. However, all a TCA peel will do is bleach the skin and make it seem as though the tattoo has been removed when in fact the skin has just been lightened.

Glycolic Acid Peel – This contains a mixture of lactic, tartaric, malic and glycolic acid and can be administered at home or by a dermatologist. The solution is meant to inflame the skin so your body can expel the tattoo ink, but it doesn’t get to the root of the problem. Therefore, it isn’t very effective and could result in pain or scarring. What’s more, a recent study showed that fluid lactic acid tattoo eraser caused depigmentation and hypertrophic scars.

Acid injections – This invasive treatment involves taking a tattoo-like needle filled with acid and injecting it into the patient’s body. This attempts to flush out ink and bring it to the surface. Scabs full of the tattoo color appear and when they fall off, take the ink with them. But Dr. Jeannette Young, the chief health officer in Queensland, Australia said: “My issue is that we have heard of some serious complications because of it. There have been other people who have developed infections, there also been risks of altering the pigmentation of the skin.”

Expert opinion “The best method for tattoo removal is with a laser. Chemical peels and other modalities do not penetrate deep enough to remove the ink from the tattoo that is in the deeper dermal layer of the skin. “

The prospect of a DIY and pain-free cream, which will get rid of your tattoo in next to no time, is one that appeals to several people. But the phrase “If it’s too good to be true, then it probably is,” definitely applies here.

These creams usually contain chemicals including hydroquinone, kojic acid, alpha arbutin and TCA, which are meant to dissolve the tattoo from your skin. And while they may slightly fade your tattoo, these removal creams cannot access the layer of skin where ink is stored known as the dermis. 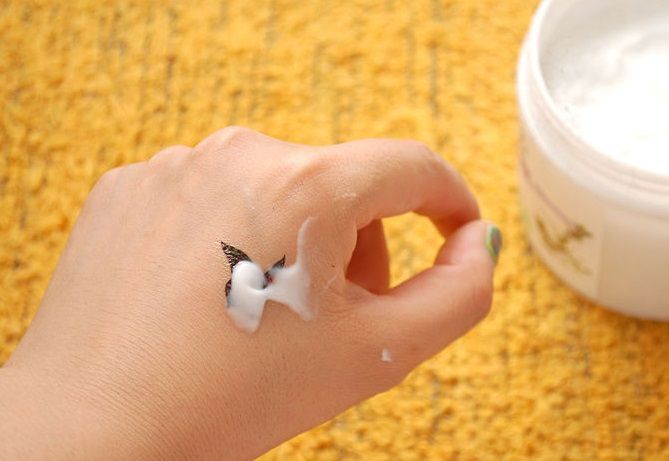 In addition to burning and irritating the skin, tattoo removal creams cause scarring, lots of false hope and a rather pointless dent in your bank account.

Expert opinion “You will be best served by not wasting your money on any of the advertised tattoo removal creams as they are unable to have any effect on the tattoo pigments residing within the deep layers (dermis) of your skin. The gold standard for tattoo removal is with the use of an appropriate laser. “

This type of tattoo removal borrows techniques from a few of the other flawed methods mentioned previously. It involves using an inorganic chemical remover developed by Rejuvi Laboratory California, which is applied in the same way as the original tattoo.

However, you only have to do a quick search online to uncover various horror stories about this type of removal. A story on the Daily Mail website shows how the treatment caused one man to suffer from unsightly bumps and scars on top of his tattoo, which is still clearly visible.

Some unfortunate Rejuvi patients have needed steroid injections to cope with the pain and redness, while others enlisted the services of solicitors due to horrible scarring and terrible results.

Expert opinion “Rejuvi involves the tattooing of chemicals to extract the tattoo color I once saw a patient after he had the Rejuvi procedure which had caused extensive scarring. The patient required several treatments with Fraxel to improve the appearance of the scarring. We even published a case report about this

Cryosurgery, also known as cryotherapy, is the process of removing unwanted layers of skin by freezing them off – much like you would do to a wart as seen in the picture below.

The process is not for the faint-hearted, though; it involves spraying on a freezing agent which induces frostbite and then sanding layers of skin off the affected area. Because it can be extremely painful, cryosurgery is performed under local anesthetic.

Cryosurgery is one of the least popular types of tattoo removal in the UK because it isn’t entirely effective. It also has a number of drawbacks. These drawbacks include:

Expert Opinion “I do not recommend cryotherapy for tattoo removal to my patients. The lasers that are available are much better targeted at tattoo particles than cryotherapy. I would expect significant scarring if one used cryotherapy to remove a tattoo as opposed to using an FDA approved laser. If your dermatologist does not own a laser for tattoo removal, I suggest you seek one who does.”

The right way to remove a tattoo

It is clear to see that all of the aforementioned methods and procedures have harmful and painful flaws, which usually fail to remove the tattoo anyway. The only way you can guarantee safe and effective results is to choose laser tattoo removal and treatment. 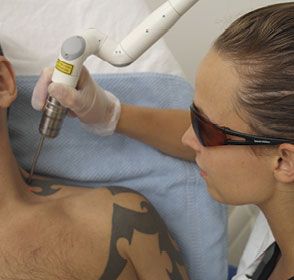 You may experience some side effects such as blistering, scabbing, swelling, but these are signs that the treatment is working and the body is healing.