Abstract: Permanent makeup removal – Eyebrow laser tattoo removal is a frequently implemented cosmetic procedure performed by beauticians. From a technical point, PMU is considered a facial tattoo. Failed procedures or a change of mind can lead to the desire to perform the removal of permanent makeup.

The purpose of this retrospective evaluation of patients who came to the clinic with the desire to remove permanent makeup between 2011 and 2015 was to explore the problems, side effects, and results in order to define treatment guidelines for other doctors and laser professionals. Dr. Rümmelein from Switzerland evaluated 87 individual cases in total. In treatable cases, i.e. 52 out of the 87 cases, laser treatments were performed using a nanosecond Q-switched neodymium-doped yttrium aluminum garnet (Nd: YAG) laser. It takes between 1-12 treatments to remove the permanent makeup. In three cases, the color of the permanent makeup could not be removed by laser and remained after the treatment.  In two cases, laser treatment had to be terminated due to color changes towards the green-blue spectrum.

Before removing permanent makeup, a laser test spot is urgently recommended as unforeseeable color changes can cause severe aesthetically unpleasant results. Covered up permanent makeup (skin color) is particularly susceptible to changes in color. A heat-induced shrinking of the eye area can cause an ectropium. Surgical solutions also have to be taken into consideration. The use of proper eye protection with intraocular eye shields is mandatory. This article is an attempt to set up some guidelines for the removal of permanent makeup.

Similar to conventional tattoos, cosmetic tattoos called permanent makeups (PMUs) are growing more and more popular. The permanent coloration of the eyelids, eyebrows, and lip outline has been performed with increasing frequency in recent years. In contrast to other tattoos, permanent makeup is not meant to stay for a lifetime but it will vanish after three to five years.  To achieve this effect, the color is not inserted as deep as it is in the case of a conventional tattoo. Aside from aesthetic reasons, permanent makeup removal – eyebrow laser tattoo removal might be used together with reconstructive surgery, for example after a mammilla reconstruction or due to medical issues like alopecia areata totalis. The biggest risk concerning permanent makeup removal – eyebrow laser tattoo removal is human failure concerning the wrong color choice, size, shape, or a procedural mistake (Figures 1 and 2).

Most of the time, patients in this situation trustfully consult their aesthetician, who offers a skin-colored cover-up tattoo which is placed right over the failed permanent makeup tattoo. Although this perceived solution sounds very easy, it rarely leads to satisfying results as it often looks unnatural in addition to not fully covering up the original tattoo. Since it cannot adjust to the tanning of the skin, it subsequently becomes very visible during summer. Therefore, an aesthetician should not attempt to cover a tattoo. One should consult a doctor and work out a solution with a dermatologist who specializes in laser medicine (Figures 3 and 4).

Aside from potential aesthetic issues, permanent laser makeup removal – eyebrow laser tattoo removal also carries a certain risk of medical complications, as does every tattoo. The risk of infections wound healing complications, keloids, and hypertrophic scars can never be completely eliminated. In very rare cases, eyelid necrosis or ectropion can occur. Lastly, even the inserted color can lead to negative reactions such as granulomas or allergic reactions (Figure 5).

Nowadays, tattoos are performed with an electric tattoo gun, which inserts different colorants into the skin. In the past, these colorants used to be inorganic pigments, but these days it is usually made of synthetic organic pigments. Colored azo pigments are often used for reds and yellows, while polycyclic pigments are used for blues, greens, and violets. Normally, the colors contain metal ions.

Professional tattoo artists order their colors from different producers all over the world. Some of that colors are not entirely pure or the ingredients are not clearly stated. Hence, it is no surprise that a lot of consumers do not even know what exactly is getting injected under their skin, which automatically poses a threat to their health. The Europen Institute of Health and Consumer protection made an investigation of 60 different colorants in 2015, which resulted in 55% of it being prohibited.

Since 2006, tattoo colorants are regulated by the food law act with statutory chemical and microbiologic quality standards. However, in the EU, there are countries that do not have any rules or regulations and if they do, they differ in each country. The method of choice for removing intradermal pigment is treated with a Q-switched neodymium-doped yttrium aluminum garnet (Nd:YAG) laser. Q-switched laser utilizes the principle of selective photothermolysis, whereby the wavelength is chosen in accordance with the target chromophore and the duration of the pulse has to be briefer than the thermal relaxation time. If these guidelines are followed properly, unspecific heating of the surrounding skin can be avoided leading to scarring in less than 5% of cases. In the case of multi-colored permanent makeup, different wavelengths have to be combined (Figures 6 and 7). 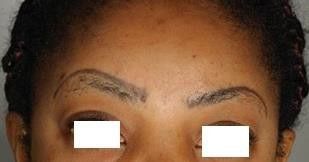 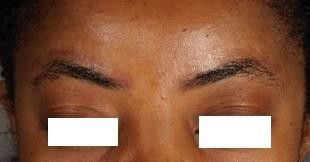 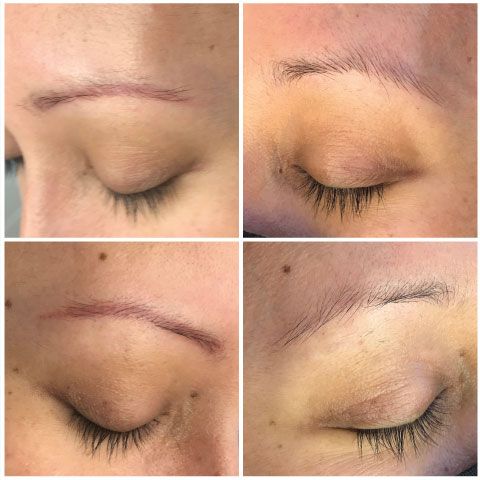 The skin depth that the laser light is able to penetrate depends on the wavelength and the size of the spot on the laser. Longer wavelengths and bigger spots lead to increased penetration depth.

When the light of the laser enters the skin and meets the color, it shatters the pigments into small fragments, which are then removed either by macrophages through phagocytosis or via the lymphatic system. A typical reaction observed immediately after treatment is instant whitening of the skin which is caused by the release of gas while heating the pigment.

In the time period between 2011 and 2015, 87 patients requested the removal of their permanent makeup at the clinic of Dr. Rümmelein. Out of the 87, 52 were judged as treatable while the remaining 35 were excluded from treatment. The reasons for the exclusion were non-treatable colors, unrealistic expectations, and patients’ decision not to undergo treatment because of potential side effects. In each case, treatment was performed with a Nd: YAG nanosecond laser. Appropriate eye protection is crucial; hence, metal protection goggles, specialized laser protection eye-stickers, or intraocular eye shields were used in order to ensure sufficient patient safety. The procedure began with an 8-mm spot at an energy density of 1–1.5 J/cm², depending on the reaction to the color. The lowest possible energy to perform immediate whitening was used. During treatment, air cooling was applied. After 20 minutes, a second treatment was performed under the exact same conditions.

In summary, out of a total of 87 patients, 52 were eventually treated and 47 of them have had their PMUs completely removed. No cases of scarring or unwanted hair loss were observed (Figure 8). 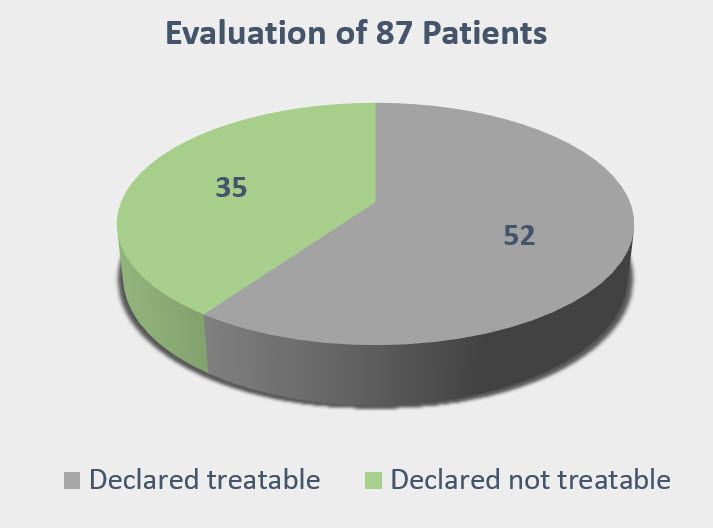 The major risk of using a laser to remove permanent makeup is a paradoxical darkening of the color, which is, unfortunately, the exact opposite of what the attending doctor is trying to accomplish. It seems as if colors containing bright pigments (often skin color) are most vulnerable to such color darkening. Although this strange reaction has yet to be explored in detail, it is rather safe to assume that it has something to do with the different states of iron and titanium oxidation,  e.g., as Fe2+  (ferruginous color) oxidizes into Fe3+ (black). In most cases, those resulting colors cannot be removed by lasers, which means that surgical methods have to be considered.

Another risk is trying too hard to remove the permanent makeup, instead of just accepting that the skin is not responding to the treatment. This often results in fibrosis and hypopigmentation, especially after Q-switched ruby- laser treatments. It can also lead to hyperpigmentation in the case of darker skin types. In these cases, a Nd: YAG-laser is recommended as it is safer to use on the epidermis due to its long wavelength. If signs of scarring occur, the actual treatment with the Q-switched laser can be combined by using a fractional CO2-laser which seems to reduce those side effects.

To avoid such complications, a test-treatment should always be performed on a hidden area of the skin in order to observe how the skin and color react to the laser. Patients should also be informed that this treatment will take more than a few sessions and that they have to live with a work in progress for some time (Figure 9). 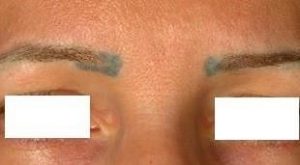 While it is very easy to have a permanent tattoo done, removing it poses a significantly bigger challenge, which in turn leads to a relatively high number of complications due to unprofessional methods of removal. Failed removal attempts the cases wherein a change in color occurs can even exacerbate the problem, leaving excision as the last resort procedure. The major problem concerning tattoo colorants is its ingredients, which are not regulated by law in many countries.

For pigment removal, the method of choice is a Q-switched laser. Treatments should only be performed by qualified doctors in order to avoid eye damage and side effects such as scarring. Our numbers suggest that if applied correctly, the Q-switched laser can achieve excellent results in a majority of cases. With tattoos that consist of colors other than black, a laser with the correct wavelength has to be chosen in order to remove it;  hence a multi-colored tattoo requires the combination of different laser types.

Which laser wavelengths for which color?

Treatment of colored tattoos can be tricky, which is why there should also be a test shot prior to every laser treatment in order to test the reaction of the color. This is best performed on a small, hidden area of the skin where a potential color change cannot be seen right away or the area can be excised in a case of a bad reaction.

If these guidelines are followed closely, the Q-switched laser can be considered the gold standard for permanent makeup/eyebrow removal when the laser treatment is performed by a qualified doctor. Unfortunately, patients and even theoreticians often lack relevant information. Federal authorities should earnestly consider patient safety and enforce adequate regulations.

Dr. Rümmelein presented this topic at the IMCAS World Congress in January 2016.

Get information and updates from Premium Tattoo Removal about the latest in tattoo removal. Unsubscribe at any time.