Can a neck or facial tattoo be removed by laser? The short answer is YES! People get neck and facial tattoos for a variety of reasons, from supporting a favorite football team to proving their dedication to a special someone. Unfortunately, life is full of surprises, and even if you stay loyal to the same club and partner forever, your personal tastes may change over time. Put simply, those inked Movember handlebars and the hilarious hashtag on your neck may not benefit from the longevity you originally assumed.

On top of that, there’s society’s reaction. Sure, you know what you’re really like beneath the symbols, but most people simply see the ink. That job you’ve always dreamed of could elude you simply because the company has a strict policy concerning appearance; clubs may deny you entry in fear that you’ll cause trouble, and you could even find yourself a target for meticulous police officers. Generally speaking, a tattoo above the collar can mean bad news for its wearer, regardless of their socio-economic status, education, disposition or interpersonal skills. 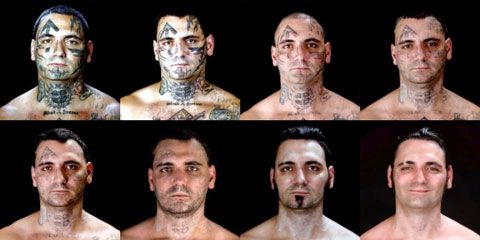 An extreme case, yet an excellent example, is former White Supremacist Bryon Widner, whose neck and face were almost entirely covered in the markings of a racist belief system. Having rejected his former ways, Bryon Widner was confronted with the seemingly impossible task of social reintegration whilst looking like a living billboard for bigotry. That was until after sixteen months and over $35,000 of extensive tattoo removal, which eventually liberated Bryon Widner from his previous lifestyle and allowed him to start afresh.

So the good news is that neck and facial tattoos can be removed by laser, but there are always details that you need to bear in mind. For instance, if you were to have a tattoo erased from your arms or buttocks, it would be less painful than having one removed from the neck or face. This is because areas of the body with higher fat levels provide a form of cushioning, whereas areas closer to the bone will prove more sensitive, therefore soreness is more likely. Whilst removing tattoos from the face with a laser, the client must wear solid, non-reflective goggles; this is to prevent damage to the eye region, which is of course very delicate. If the tattoo is next to the eye or on the eyelid itself, it is imperative that only a highly experienced practitioner conducts the procedure, with the client wearing ocular eye shields beneath the eyelids.

Even with the above safety measures taken into account, there are other factors to observe. Micro-pigmentation on the face should be treated with caution, as some flesh-colored inks can contain ions that turn black when lasered, leading to the exact opposite result as desired. Still, it’s also important to note that the head and neck maintain the largest amount of blood and lymph nodes and have a large vascular supply. This means that the likelihood of success is greater in these areas.

In conclusion, tattoos on the neck and face can be removed, even those close to the eyes and around bony areas. However, laser tattoo removal should be approached with the same amount of caution and forethought as tattooing itself, if not more due to the considerations listed above.

If you have a tattoo that you wish to be removed, please call us on (832) 924-6101, or simply book a free consultation online at www.PremiumTattooRemoval.com .